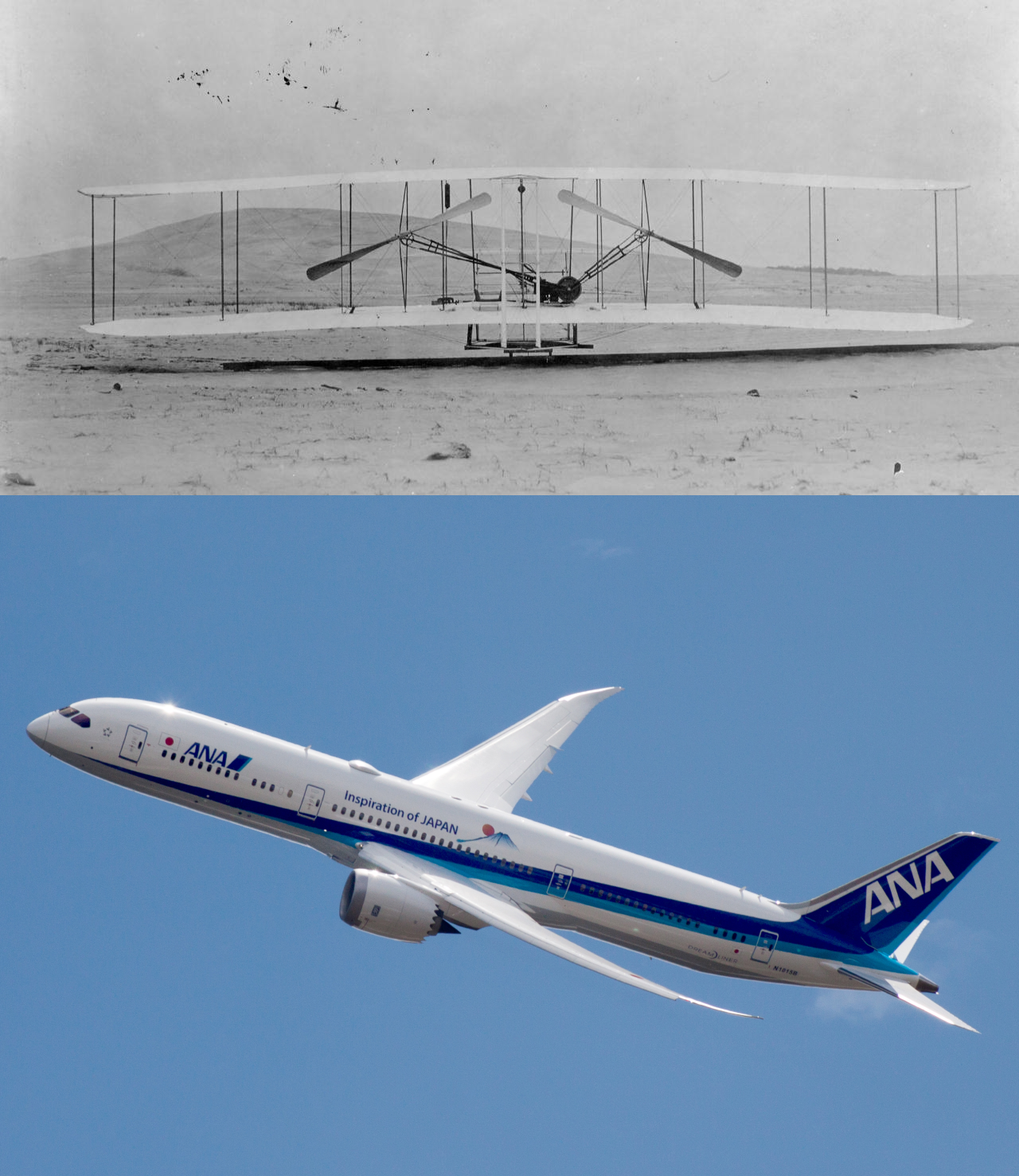 21st century aircraft are the most intricate examples of composites ever conceived. Millions of hours of manpower and billions of dollars are required to get even a prototype off the ground; a far cry from two brothers in a bicycle shop. Modern commercial aircraft have begun crossing the threshold of being constructed primarily out of composites. In 2016, the first all-carbon fiber aircraft took its maiden flight. It’s no secret that aerospace engineers have long preferred to use composites over traditional materials, though it hasn’t always been that way.

By modern standards, the Wright brothers’ Flyer hardly looked airworthy. In fact, it’s hardly recognizable as an airplane. To reduce weight, the Wright brothers designed & constructed the Flyer from the flimsy combination of wood, wire, and canvas. This evidently concerned them; in the moments before the Wright brothers’ first flight in 1903, a crewman noted that the pair shook hands “like two folks parting who weren’t sure they’d ever see each other again.” Ironically, it’s the crewman who was nearly killed when a strong gust swept the parked flyer down the beach, end over end, with the man entangled in the wires. The flyer was totaled after just four short flights. The fledgling design was light, but not durable. Despite this, hundreds of early aircraft models emerged using these simple and accessible building materials. Alternatives were far too heavy or too expensive to fly on a machine that was still largely considered a “stunt” or “hobby”.

After the First World War, the airplane was no longer seen as a novelty. They had proven invaluable in a variety of functions during the war, and it was apparent that airplanes would henceforth be an integral part of both military doctrine and domestic life. With that expanded role, aircraft requirements changed dramatically. Not only must they withstand bullets and shrapnel, but also, they must endure inclement weather, long distances, and rough landings. Thus, aircraft manufacturers transitioned away from the wood, wire, and fabric design and began using aluminum as the primary material. Aluminum, while heavier than wood, is stronger, more pliable and was readily available.

When the Second World War broke out in Europe. It sparked an international race to develop the best aircraft. Over the course of the war, engineers pushed aircraft to the limits; they flew faster, farther, and higher than anything previously had. Though the structure of these aircraft remained primarily aluminum, composites began emerging in specialized roles. Plexiglass provided a light, clear, and shatter-proof solution to enclose the cockpit and gun positions from these increased speeds and altitudes. Early in the war, it was discovered that fiberglass is transparent to radio waves. It was quickly enlisted to encase and protect the new, transportable radar system in Allied planes. The ability to detect enemy aircraft and ships from your own plane gave a tremendous advantage to the Allies, and it wouldn’t have been feasible without a fiberglass radome to protect the delicate system. However, a pilot from that era would undoubtedly tell you that the most important of these was the self-sealing fuel tank. Rather than plating the fuel tank in bulky armor, the tank was constructed of multiple layers of vulcanized rubber, fabric, and untreated rubber. When enemy fire punctured the tank, the “rubber sandwich” would absorb the fuel and expand, closing the hole. This featured greatly reduced the number of aircraft running out of fuel or bursting into flames after taking a hit. Despite initial success in these auxiliary roles, composites still weren’t being used in the primary structures.

In the late 1950’s, with an increased demand for luxurious commercial flights, commercial aircraft manufacturers began experimenting with composites for interior components. Once composites had proven their strength and longevity, engineers were ready to incorporate them into secondary aircraft structures like flaps, ailerons, and rudders. By the late 1970’s the rotor blades on Chinook helicopters were primarily fiberglass. However, it was in the early 1980’s that the use of composites in commercial aircraft skyrocketed. In 1981, the Boeing 767 took off with 3% of it’s structures being composites. In 1995, the 777 launched with 11%. In 2011, over half of the Boeing 787 was comprised of composites. The fuselage, wings, and stabilizers were designed with a carbon fiber epoxy laminate. The secondary structures are comprised of a carbon fiber sandwich construction.

The Future of Flight

Although composite technology has taken flight a long way, there is still much more to be discovered. The industry is constantly demanding lighter, faster, and more efficient aircraft; composites are the clear choice for improving their performance. Before the Flyer was destroyed that day, its longest flight had barely made it two football fields in “perfect” conditions. Today, airplanes can traverse the globe and climb to the stratosphere – all thanks to composites.